Some little moments from my routine life over the last two days. I hope I do not bore you dear blog follower.

bitch-boy was outside working on a DIY type chore I had instructed him to do. I was inside  enjoying some yoga and other exercise. After a couple of hours, I heard him entering the house and I went to the hallway.

‘Is the job finished puppet?‘ ‘No Mistress, but it’s started to rain quite heavily.’

‘It seems to me the job can be finished in the rain without being spoiled. That is the case, yes?’ He paused for a moment and then answered. ‘Yes Mistress.’

‘Out you go then.‘ I had a long relaxing bath and felt quite aroused when I got out; thinking about my life of power and unashamed, pitiless bitchiness. I went to my bedroom. bitch-boy had not long come back inside; the job was finished. I called to him to come to me. He entered the bedroom to find me propped up on the bed, my back against the headboard. I was naked, but for six inch heeled platform mules, . (My body is pretty  AMAZING at the moment, though I say so myself! For me, lock-down means: No takeaways, no eating out, minimal alcohol and so much exercise!) (Link to the post explaining the image.)

‘Does that make you desperate puppet, seeing my body like this? His response was a deeply emotional, heartfelt, gushing of how, I could not imagine how desperate he is, blah, blah, blah. I responded.  ‘But I can imagine how extremely desperate you are little puppet. I know exactly how cruel I am being and how much frustration you are suffering. It’s one orgasm in 16 weeks for you now isn’t it. And I know that orgasm did not clear the frustration of the the orgasm free 14 weeks that came before it. But I am utterly pitiless now. I have learned over this lockdown that you do not break, regardless of whatever I do to you. So I am a totally sadistic bitch because that turns me on. No guilt. No sympathy for you. No mercy for you. You introduced me to femdom, you were born a submissive, you can’t be content without being dominated. So you are dominated, but in the manner I CHOOSE, I’m afraid. My way or no way puppet.’

I switched on my wand. ‘Yet again, I am not going to allow you to lick me, but you can watch me bring myself off with my Lelo.’  After a VERY SHORT while, I began the climb to orgasm. My eyes were now shut as I spoke. ‘I have more orgasms every single week than you will have this year, don’t I puppet. And the day you did get to cum, I had more orgasms THAT SINGLE DAY than will get this year. And just think, the raffle tickets have begun to be ripped out now, so we are on our way to an orgasm-free life for you.’ I could say no more, as the climb had reached the mountain’s peak. My orgasm was overwhelming……………………

[NOTE: I don’t know if bitch-boy is unusual with this, but we have found, to my cruel pleasure, and his terrible levels of frustration, that if he has gone more than say two weeks without orgasm, then, even if I allow him a full orgasm, (under the sole of my shoe of course), within an hour or so, his frustration returns, pretty much as though he has had no full orgasm. In the early days of his chastity regimen, we found I needed to give him two orgasms the same day, to free him of the frustration levels he had built up. Although I did learn that, and applied it because I was merciful then, I have now evolved to my current levels of pitilessness. There is NO PITY! He will NEVER get to have two orgasms in a day on his current frustration laden journey to an orgasm-free existence.]

The next day, I was using bitch-by for his vanilla company and we were both cuddled up on the sofa watching a movie: UNDER THE SILVER LAKE. (A weird film, but some originality and humour.) There were quite a few VERY ATTRACTIVE and scantily clad female bodies which I did not mention as we watched, but I knew must have been a torture for bitch-boy. Then, in one scene, the dialogue between a beautiful young woman, who had been sunbathing, and a young man, was broadly as follows. She speaks first:

‘Yes, Everyone does it.’

I did not even turn to look at my little puppet as I spoke. ‘Not EVERYONE does it though; do they  little puppet.’ Poor bitch-boy breathed emotionally a couple of times  out of his nose, before his whispered answer. ‘No Mistress.’ I chuckled and returned to watching the movie; contentedly feeling very powerful and mean. (I also made a mental note to pose and strut in my see-thru dressing gown and six-inch-heeled platform mules, for a minute or two before bedtime, to twist the knife of frustration deep within bitch-boy’s soul.)

Moments 4 to, goodness knows how many

I do not keep a count of each time I use a curt instruction during vanilla time, but I NEVER fail to get a brief moment of bitchy power-rush when I use one. (There have been four previous posts on curt instructions. The post to which I have linked above, has a link to the previous post, and that post to the post before that, etc.)

Believe it or not, There is quite a bit of vanilla time in my life, even in lockdown! Days with things like; deliveries of groceries, zoom get-togther’s with family and friends, minor illness for me like the common cold, major DIY work in which I have a role, mornings that start off with vanilla time by my choice, etc. By sod’s law, sometimes these days are consecutive.

The joy of curt instructions is that they, for a brief moment or two, elevate me to ALL my feelings of power and meanness, and for quite a considerable time afterwards, drop bitch-boy deep into feelings of being helplessly under the control of a domestic, tyrant. Given he is having to cope with his new, pretty extreme, caged and denial routine, during vanilla time, it is most appropriate that I keep up his feelings of subjugation to me; augmenting his caged denial.

I also think, if like me, a Domme is brought up to be VERY polite, ….. please this and….. thank you that….. without fail, that politeness is so ingrained, there is a  magnified thrill when issuing a curt instruction.

‘Another cup of tea.’ ‘Get my indoor Ugg boots.’ ‘Sort the laptop for my Zoom yoga session; NOW.’ ‘Bring me my cell-phone.’ ‘Get me my book.’ ‘Top up my wine.’ ‘Put my cell-phone on charge.’  etc.  Curt instructions; each one injecting subjugation into his submissive mind, but were they polite requests instead; each would be a wasted opportunity for pleasure for me and subjugation feelings for him.

And of course, the absence of a thank you when something is handed to me. That silence is remarkably aloof and dismissive! Or even better than a silence when something is handed to me, is to ask in a slightly irritated voice, ‘What do you say?‘ and have him humiliating himself as he answers, ‘Thank you Mistress’; thanking me for the privilege of that instance of serving me.

Link to my latest Journal. 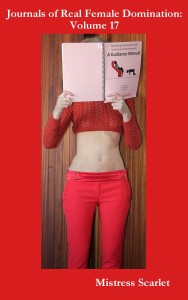 45 thoughts on “It’s the little things”